I worked with World Horse Welfare to produce 3 sculptures for their charity horse trail, which was launched at the Royal Windsor Horse Show in May 2019, continuing with the sculpture trail around Windsor, London and Ascot, my horses also featured the Beaufort Polo Club and Royal Ascot Racecourse. An auction was then held at the end of the year at Kensington Palace to raise much needed funds for horses from all over the world! You can read more about the 2019 trail here.

My first project was to paint Nick Skelton's Olympic gold medal winning stallion, Big Star. I was asked to paint two portraits of him on either side of my sculpture (itself painted as a portrait of Big Star), one depicting the London 2012 Olympics and the other at the 2016 Rio Olympics where they both achieved gold medals! This was quite a challenge to paint a portrait on a 3 dimensional object, and I was often found lying upside down in order to get a proper angle on a feature I was trying to portray! The sculptures themselves were very heavy and not easy to manouvre so I found that I had to be the flexible one when it came to painting every nook and cranny!
I also painted a smaller model of Big Star which was on display at one of the rehoming centres and was amongst the auction lots at Kensington Palace.
The second sculpture was a depiction of the brick Kiln horses of Nepal and was commissioned by Deborah Meaden of TV's 'Dragon's Den'. As a passionate horse lover herself, Deborah was shocked to see the conditions that the Nepalese horses had to work in and was keen to show the horses plight. Her design was interpreted and I  then got to work. 'Ragu', as the sculpture was named, was great fun to paint and had so many intricate details I had to do a bit of research in order to get it just right! Deborah Meaden was interviewed at the Royal Windsor Horse Show talking about her time at the brick kilns and talking about her ideas in the design for Raju. You can watch it here

At Kensington Palace with Alan Titchmarsh and his sculpture

Big Star all wrapped and ready to leave 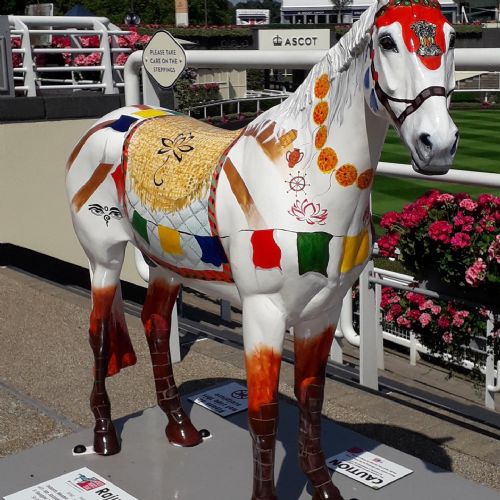 Deborah Meaden, Jan Jaquelin who interpreted the design and me at Royal Windsor Horse Show

How to get in touch